3 Inspections Before Buying a Commercial Building with a Flat Roof

3 Inspections Before Buying a Commercial Building with a Flat Roof

The purchase of a commercial building with a flat roof may be surrounded by numerous tasks and activities, with most of the attention going toward moving in and getting open for business. Prior to finalizing the purchase, however, you should dedicate some time to conduct an inspection of the roof to ensure that there aren’t any existing issues or problems that will crop up shortly after escrow closes.

1) Inspect the interior of the structure – Take a look at each room in the structure, focusing on any evidence of leaks, including dark water stains and bubbling paint. With flat roofs, water from a leak can travel across structural elements such as beams and framing before dripping through the ceiling, so keep in mind that water may not be entering the building directly above the stain. Bubbled paint on walls may also be indicative of a roof leak where water is running down the interior sides of the structure rather than pooling in areas above the ceiling.

2) Check the roof – The absence of water stains and/or bubbled paint in the structure does not guarantee a fully functional roof, as leaks can go on for months without damaging the interior. When checking the roof, look for any physical issues such as blisters, cracks, or pooled water. When you’re walking on the roof be aware of any areas that feel soft or spongy, as they may be rotting due to exposure to moisture that has found its way past the outer layers of protection. Be sure to inspect the flashing around structures that penetrate the roof deck, such as vents and pipes, as these areas are commonly associated with leaks. Look for any signs that flashing and/or seals are cracking or are pulling away from vents, fan housings, and pipes.

3) Drainage – One of the biggest challenges with flat roofs is maintaining adequate and efficient drainage, which minimizes stress from bearing the weight of standing water as well as the potential for leaks. If you see standing water or evidence of pools that have evaporated, check gutters and drains for blockage. Downspouts may not lend themselves to visual inspections, so do a test by running water into each one and check the drainage flow at the other end. If water is draining slowly, you may be able to use a machine similar to those used by plumbers that runs a snake through the drainage pipe to break up the debris that has caused the clog.

These inspections are relatively easy to do, especially checking the interior of the structure for signs of problems. There are, however, many subtle signs of potential problems with flat roofs that may only be detected by a trained eye. In these situations, the money spent on a professional inspection is often a solid investment that catches trouble earlier rather than later. 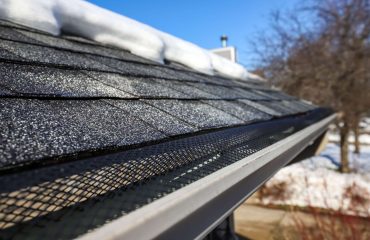