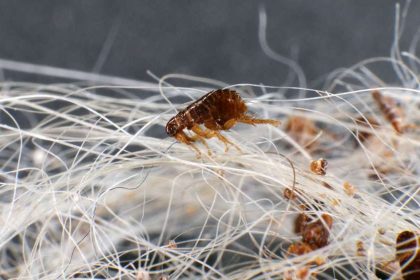 While the stereotype of bats is that they live in caves with colonies numbering from thousands to over a million flying animals, they are quite happy to take up residence in unused residential attic spaces as well. While this fact may be distasteful, it gets worse as bats are typically accompanied by insects known as bat bugs. Here are some of the basics of these parasites:

1) Referred to as ectoparasites, bat bugs live on the skin and in the fur of bats in a colony, feeding on their blood.

2) There are twelve species of bat bugs in North America.

3) Bats bugs, to the naked eye, look almost identical to bed bugs, are the same size, and are commonly mistaken for them. The primary physical difference is that bat bugs have longer and more hair on their bodies. The species that is most commonly mistaken for bed bugs is the eastern bat bug (Cimex adjunctus).

4) Bat bugs will normally stay in the proximity of the colony in a residential attic, but if the colony shrinks in size or migrates out, they will enter the house in an attempt to feed on its residents as well as pets.

1) The best method of controlling bat bugs is to prevent bats from entering the attic or other spaces that may offer an attractive place to roost. Bats can squeeze through spaces that are as little as one-half of an inch, so the first thing to do is to call for a professional roofing inspection to find potential entry points and then seal them.

2) If bats are already present, take note of their exit and entry points. Bats will normally leave the attic at around dusk and return at dawn and may use different openings for departing and returning.

3) Getting bats out of the attic will probably require the services of a professional bat removal company. Once the bats are removed, the roosting area and its surroundings should be sprayed down with insecticide to control bat bugs.

4) After the bats have been removed and the roosting area has been sprayed, the attic should be cleaned out to remove droppings and remains.

5) Any spaces that were used by the colony for ingress and egress should then be sealed by a professional roofing company to prevent their return.

Probably the biggest reason for the increase in bat and bat bug infestations is suburban sprawl, which brings people closer to where bats live. To prevent both types of infestations, have a professional roofer assess your home for potential entry points and have them sealed as quickly as possible.

How to Reduce Moisture in the Attic